Thailand has many wacky reasons why foreigners are attracted and one great reason is the country’s most popular festival of Songkran the Thai lunar New Year which runs annually from the thirteenth to the fifteenth of April.

The origins of the festival are steeped in Buddhist ceremony as a time to pay respects to family elders by blessing them with water for good luck, good will and a healthy life.
It sounds very formal, but in fact raucous celebrations can be found throughout the length and breadth of the country as Thais enjoy a three day holiday by taking to the streets and partaking in water throwing which lasts from dawn until dusk. As Thais are very friendly they welcome expats and foreigners to join in the fun and festivities.

Thailand’s capital city of Bangkok is one of the most vibrant, fun and exciting cities anywhere on the planet. Expats and foreign visitors are drawn there for a multitude of reasons including entertainment, shopping, and a colorful history and culture all of its own.
One of the main attractions of Bangkok is the sheer size of the place with all the hustle and bustle of everyday life which goes with it, from busy street sois selling everything from food, Buddhist images and even snakes blood. If there is something which has to be said is true about Bangkok is that no one ever gets bored visiting this fascinating city in the center of the hub of South East Asia. As everyone is aware Thailand is famous for its delicious and spicy food, beautiful beaches, all year round sunshine and the entertainment pleasure domes of Pattaya and Patpong in Bangkok.
However, many expats are also attracted to stay in Thailand by pursuing activities of the more spiritual nature, for example, practicing Buddhism and the relaxation technique of meditation. Thai Buddhist temples are often quite happy to allow foreigners access to learn these techniques and others like therapy massage.
One such temple that is situated on the Island of Koh Srichang just 12 kilometers off shore from Sriracha and an hour from Pattaya, has one of the most bizarre shrines in Thailand with mummified bodies in a state of decomposure on public display for all to see. Medication and prayers are performed in the same room as these bodies as the temple openly encourages devotees from both Thailand and abroad to practice there. 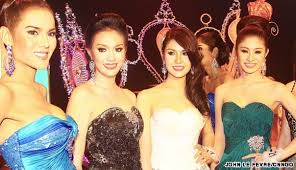 Even although Thailand is a country with conservative values and strong views on family, religion and the monarchy, there is an openness and acceptance of the higher than normal percentage of transvestites, or more commonly known as “Katoys” in Thailand compared to other countries.
Some of these katoys are extremely beautiful for example those working in the transvestite show of “Tiffany’s” in the beach resort of Pattaya which holds an annual Miss World Tiffany beauty pageant which draws a lot of attention from around the world.
Whether it is from genuine interest or just curiosity, some expats enjoy being in the company of transvestites as friends or actively seek intimate relationships. This can be conceived by some as one of the many wacky reasons why expats enjoy living in Thailand, although from the Thais, it merely warrants any interest at all due to the acceptance of katoys in Thai society.